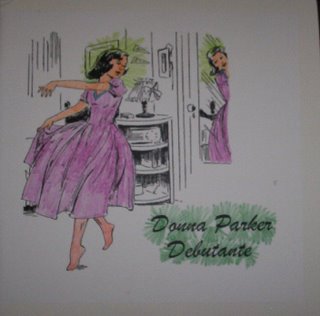 I'll say this about Philadelphia, it's one helluva walkin around kinda town. Walk, walk, walk, you could just about walk from one end to the other & not break a sweat. And for a city that's supposed to be big, it sure seems quaint. Not to disparage or nothin, I like that. What I mean is, things can happen right in your own back yard, so there ain't no need to be drivin a car or even ridin a subway train. Just walk! Like the other night; I was finishin off the last of MG's homemade egg salad taco's when I heard what sounded like a ruptured car alarm goin off. But it weren't a standard alarm sound. Repetitive, yeah, but also muffled & a bit too metallic. So I went out to have a look. I followed the wretched croak down about a block & don't you know I stumbled right into a noise show? Some band called Pabst Blew Ribbentrop (they had a banner up behind'em) was goin at it in this room (actually a screened in porch) & the fur sure was flyin. They had their synths, boxes, pedals, one of the guys was chewin on a chord, everybody was pumpin their fists, waggin their heads, the whole bit. Dudes was doin apewalks, chuggin cans of beer then smashin'em into each others foreheads. The band & audience was makin monkey faces & shootin finger guns at each other, a regular OK Corral in action. I seen a guy tear a little Sonic Youth poster off the wall, wad it up & eat it, then get put in a headlock while about 5 other oafs piled on givin him noogies 'n spillin suds all over place. Then outta the corner of my eye, I spied this girl what was takin in the whole spectacle, lookin right at'em & rollin her eyes. A sympatico! I ambled over & tried to talk but the level of static was deafening. So we went outside where it was a bit more tolerable for speakin. We exchanged the usual pleasantries; she told me her name was Dimes & that her boyfriend was the "singer" wearin the black Whitehouse t-shirt who called himself, appropriately, Piehole. She said they'd just moved in & that this was an open house for whoever wanted to drop by & thanked me for comin (nice people in this city too, just adorable!). So I got to askin about the band 'n whatnot & she went to makin a cigarette,laughin the whole time. Said the name of the band was a pun; they was into beer for real, but the gay Nazi thing (?) was strictly ironical. A play on words if you will. She didn't know for sure about Ribbentrop, but most Nazi's was gay, so fuck it. I hear ya Dimes! Told me up to a few months back, they was a Metal band callin themselves Prison Mouth but she'd put the kybosh to that. "I told'em noise was the way to go. Before they didn't know the difference between Masonna or Madonna. I sent them up to the No Fun Fest to see that shit then they came back & all they wanna do is suck Wolf Eyes dick's. Did I buy a cat in a bag or what?" I didn't know if this was a rhetorical question, so I just nodded my head yes. She was on a roll. "Look at that fuckin room. It's like 9 miles of cock in there. It's like a lame fratboy party. Fuckin dorks gone wild. Yeah it's loud & punishing, but it's got no spark. How about some equal fuckin time? These asswipe's need some Donna Parker to tear this shit up, that's what I'm sayin"! Now I was like a deer caught in the headlights. I was starin right at her but I had no idea what she was talkin about. Wha? Huh? Donna who? "Donna Parker, dumbass.You never heard her? Dude, you better get with it. Her noise is the fuckin bomb! Did ya ever see that movie, Rabid? It's kind of like that. Know how the Marilyn Chambers character seems shy & all, then that fuckin cock thing shoots out've her armpit & sucks the blood outta those dipshits & turns them into vampires or whatever? Dude, that's what Donna Parker's jams are like. Totally sick! Get her album. It's rad!" With that, Dimes stubbed out her cigarette, asked if I had an extra beer (I didn't) & went back in the house. Hell, it was a nice night 'n my feet was feelin perky, so I decided to hike on down the Record Exchange & see if that Donna Parker lp was in the house. Worst case scenario would be it ain't, but I'll still manage a belly laugh at all them Sleep Chamber albums they got that don't never sell. I do believe you could not give them things away!
But there it was, entitled 'Debutante' & released on the Twisted Village label. How about that? I reckon buyin them Xenakis lp's from all over God's creation finally paid off. Dimes was right; it might look demure, but once them contents is opened up, it's like a tenderizer poundin out yr cerebral cortex into a carpaccio. There's lot's of oscillating blips, tantalizing skree, doses of feedback & delay, all of it breathlessly navigated through the corridor between psychedelic & psychotic, as if Brian Aldiss' 'Barefoot In The Head' had become someone's reality. And while a lot of her contempo's smack of dopey pretense &/or clueless rage, Donna Parker's jams (thank you Dimes) are devoid of such trappings, instead they are as intuitive as a divining rod dowsing through the dude littered desert of noise. I trust she will never parch from thirst. Her scrambled drones are flaming telepaths of heavenly manna & boy do they burn! And dig those bewitchin hand colored jackets too. I tell ya, this record just don't never stop givin! Check her out at; www.myspace.com/msdonnaparker
LP is available via; http://www.twistedvillage.com/
Posted by Siltblog at 9:10 AM