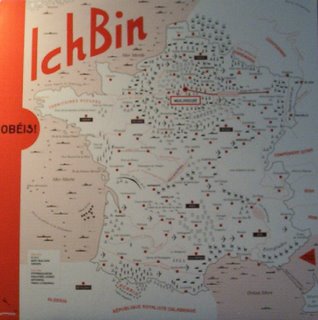 The Corsican underground music scene......hello? Is anybody there? The ranks are not exactly swelling w/representation. Ain't it considered part've the French Riviera? I would imagine all kinds've sickening sights with yachts 'n speedboats, greasy mobster type's letchin on to emaciated heiresses, wearin damn near nothin at all & swillin champagne like it was an energy drink. Beaches full've depravity,sunburned skin, tiara's & captain's hat's, monocled fatsos, a cigarette danglin from every set of lips as far as the eye can see, all of'em naked're than jaybirds, as if Bosch & Passolini had collaborated on a vile construction of society moderne. The wretched class....if I had to live there & work for'em, I think I might have something to say that'd be more untoward in my spare time. So when I found out this band Ich Bin was indeed from Corsica, it was easy to understand where they was comin from w/their violent, jerky, electronic sputter.
But that is pure speculation on my part. I got no idea what goes on there. Historically the island has been inhabited & run by every imperialist civilization you can name: Greeks, Carthaginians, Romans, Moors, Vandals, blabblahblah, till eventually it was French. Or somethin to that effect. You might say Ich Bin's palate of noise is representative of their Corsican heritage in that way. Just take a gander at the cover of 'Obeis!'. It's a war boys! There's a whole brigade've influence on here that sounds like a set've stairs bein stormed in rapid ascent/descent by DAF, Metal Urbain, Mittagspause, Suicide, Ilitich, Cabaret Voltaire, Die Kosmonautentraum, late period SPK & the more confused moments in the Laibach catalog. Waves're rippled, electronics get smashed, you can dance, fight or cry, pump your fists or swivel your hips, it's all here. Supposedly these guys was doin this back in the 80's & 90's but nothin saw the light of day till this-most've it anyways--got released as a cdr in 2002 by some Belgian label. But Poutre Apparente has seen fit to give it a proper set've steppin out duds in the form of an LP-w/2 extra tracks-an damn if it ain't a humdinger. Flared bells 'n stunted cells, the dancefloor is wet w/both brandy 'n blood. Gettin it on ya is all part've the gas, so gas up!
(Obeis! is available via www.fusetronsound.com