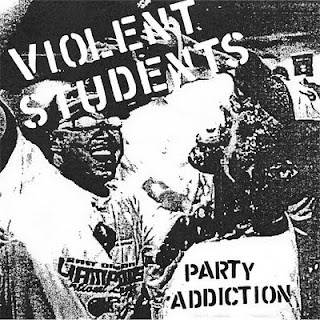 It is to my great & everlastin dissatisfaction that I's never got to a Violent Students gig. But they was windin down in Philburg as I was gettin wound up. Anything about'em seemed to be word of mouth & ever now 'n again I might find a cdr or hear tell of this're that. A slim but prime discography to be sure. And who could ever forget the artwork to they's bigtime debut COMPACT DISC for Parts Unknown? Just about the LAMEST design to ever prance down the promenade! That is until The Chickens released they's work of 7" genius on a label but a stone's throw from this Blog. Oof! It pains my eyes to even think of THAT cover.
But I's always said Violent Students needed to have an lp, a crucial, vinyl document on how they's put their there there. And this 'Party Addiction' is just sucha beast. Evidently culled from a recordin of the final live performance + a recroak of the 'A Handy Magician' cassette, there's is two ways to hear 'n assimilate this masterpiece of gunk; as either wretchin your way through Cro Mags demo's played at half speed w/a tummy ache (too much veganaise on the non gluten tater tots will do that!) or as Hajokaidian convulsing in spasms from mercury poisoning while coverin Psycho Sin's entire output. No way to know how your wired friend, but from my culture bunker this is win/win all the way home. Dig it here;
testostertunes.blogspot.com/
Posted by Siltblog at 10:30 AM

Yep, I regret the CD only release of that genius VS recording.