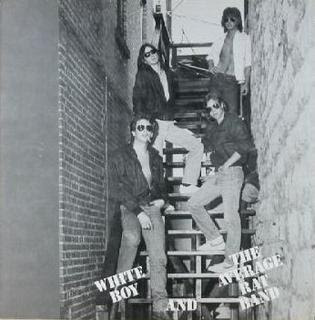 My eyes did a double take when I see this record perched in my mail trap (they's ain't got no word here for box near's I can tell). Good lord I was happy, only cause I'd been lookin for a copy since Robin Yount was a five figure Brewer. The writeup that Roach Records put togther kind've says it all, 'cept I ain't got a damn clue what's Lamour is (or was) or's this Meanstreak they's reference. I guess I'll have to get to investigatin'em! Wouldn't wanna miss out.
Some nimble-toed piker once tried to tell me this was the same band as Mr. Ott & Jake Whip had but I'd knowed that was a sack of shit 'n told him about it.He made a mess in his drawers what stunk up the bar to high heaven, but at least he's still around to deny it. The real word is the band ain't but one feller & he hired them others on the front to look all tough. It sorta works. Takes me back to some dumbshits what tried to tangle w/yours truly in Parkersburg, WV in the early 80's. None of'em even seen the blade they's surrendered to, let alone feel it. Ah, youth, to be wasted so young. Feel free to quote me on that.
So White Boy & The Average Rat Band.....hard to say exactly where they's (or he) was comin from but know this; when it wants to, this lp is as wild as a peach orchard hog. There's also some screwy ballads goin on ('Oriental Doctors', wow! Too bad Tommy Bolin ain't around to here THAT one) + an outta nowhere acoustic number too. Locked into some current that's more metal than punk, it ain't no joke, as funny as it may seem at times. In other words, Nig Heist it is not. I'm hip to the Kenneth Higney reference too, and Michael Schenker. It woulda been cool if Kenny'd aped Scorpions more than Cat Stevens, but he didn't & behold we's got both 'Attic Demonstration' AND this here White Boy lp. How's are any of us worse off for that? The best of both. Now if only that Higney lp would get rereleased.....
Find this brattled gem here;
www.fusetronsound.com/
Posted by Siltblog at 8:25 AM

sure your hip to this...
but it did get re-released