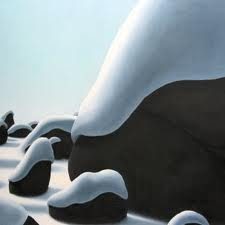 Call it intuition, but somethin tells me that Crazy Dreams Band ain't gettin nearly none of the attention & accolades they should be. I've been sayin for too long (usually in a mirror) they's about one of the top, best live bands you could wanna come across. And this latest lp on Holy Mountain has been gettin muchos spinnos on my Polynesian hi-fi & that ain't likely to stop anytime soon. Good stuff? No, GREAT.
Likes many a dandy combo, what you see (live) & what you get (vinyl) is slightly different. In the flesh the angular blues thud 'n rumble is akin to Magic Band + Doors hybrid & Lexie Mountain couldn't be any more've a transfixin or versatile front person less she was dead 'n shrouded in legend. But w/her float 'n sting attack, I'd say she's gonna be boxin ears for as long as she can embrace (or stomach) the jaded pea brains & attention deficit dipshits what's sprung up like weeds all around. Whatever happened to discernin tastes? Sadly it's just legions of deaf & dumb. And hell, here I am, ensconced out on a spit of an island, middle've nowhere, nothin but records,wi-fi, a chili butter poached lobster, ice cold tub've suds 'n two lovely "interns" to keep me jazzed & even I know that is a CROCK. Whoever said 'it takes a village" must've been talkin about the one of the damned.
But enough soapboxin. So since ain't no one has paid the Crazy Dreams bunch no mind-at least on they's sophomore effort-allow me to elaborate. 'War Dreams' isn't really an extension of the 1st one. Nope, it's a completely new kaleidoscope of sounds. Which is to say if you was confused by the S/T effort, this one could be more in your comfort zone. How would I know? Can't says that I do, but my reckonin is if you's is someone what get's down 'n can slither w/the likes of Tractor, Gunjogacrayon, Älgarnas Trädgård, Medicine Head, Equal, Checkpoint Charlie, Stackwaddy, Brastburn, Hampton Grease Band, Occasional World Ensemble, Totsuzen Danball, Ahora Mazda, Moohlah, ZOA, Mad Tea Party, Plastic People Of The Universe, Far East,Third Ear Band, Xhol Caravan, Karuna Khyal, Brainticket AND Stone The Crows, well.....this platter've prime dunt oughta fit into your greasy repertoire like fried chicken on a waffle. Syrup is optional. Available here;
www.holymountain.com/artists/crazy-dreams-band/
contact the band via; www.myspace.com/thecrazydreamsband
or
http://www.facebook.com/pages/CRAZY-DREAMS-BAND/401336445148
Posted by Siltblog at 7:50 AM