We Have A Dream. Someday, We'll Have A Little House & A Couple Of Acres. A Place To Call Home.....Blasted Al Ackerman's 'I Am Drunk' LP 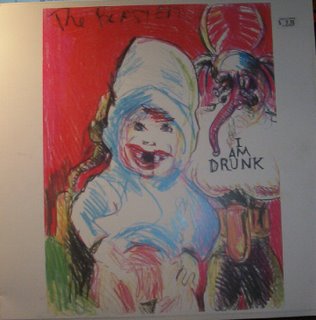 Well I do believe the years are catchin up on me. Why do I say this? 'Cause now someone has gone & released an lp by the guy who wrote the 'Hamburger Lady' letter to Throbbing Gristle back in 1978 that's on the reverse of their 'D.o.A.' lp. That's right, Al Ackerman, THAT Al Ackerman, now BLASTED Al Ackerman, has an lp of musings & blabber entitled 'I Am Drunk'. The longer ya stay in the trenches, the more likely your are to hear 'n see everything! I was perusin this album in a store the other day (ya gotta admit, the cover art is enticin) when the clerk got to tellin me the back story on it & I just about croaked from laughter. To me that's just hilarious; the guy who wrote the 'Hamburger Lady' letter-the whole 'Screwloose Lauritzen' & '250 lb meatloaf'- has a record out. In 2006! I had to buy it.
Now I ain't much for spoken word stuff. I had them Harvey Kubernik comps on Freeway back in the day & I guess they was decent. I had a Bukowski lp on Takoma that was okay, then there was that Terry Southern tape of him readin from the "Magic Christian' that was fun once. I remember fallin asleep in a car a few yrs back when someone put in a tape of William Shatner narrating from his autobiography. Good thing I wasn't drivin! Where's Landrew when ya need him? But this Blasted Al Ackerman lp ain't none of that. I don't know exactly what it is, but it's not the pontifications of a dullard. On the 'Crab' side he tells us about the moniker & how he come to get it. Blasted Al's got one of them radio readin voices, you know, the kind that just sounds right for the format. If your thinkin Garrison Keillor your way off, more like if that Jack Nicholson character in 'King Of Marvin Gardens', David Staebler, was a real life person spinnin them oddball yarns across the airwaves. It's a lot like that. It kinda makes the Hamburger Lady story seem suspect. Did he make it up? Was she real? It's hard to say. Never really mattered all that much to me anyways. Then there's this whole bit called "The Pepper Young Translations" where, presumably, he reads w/a bar of soap in his mouth. Nothin has ever made me wanna hear "The Lennie Small Wabbit Soliloquies" from 'Of Mice & Men' (performed in character by John Malkovich) over&over&over&over&over&over&over&over&over&over&over&over&over&over&over&over again more than this conceptual, fluxus-ish, nonsense. I gave it a flip & started listenin to the "live" side, but my chin kept pokin itself into my chest sayin it was time to snooze. Happens evertime I try & play it, them nappies come a callin somethin fierce! It's got 'ya-had-to-be-there' written all over it. The insert (& website) use words like "lugubrious" & indescribable" on the matter of Blasted Al & his work & I would concur. On both counts. What more can I tell you? If you wanna buy a record by the Hamburger Lady guy, here's where to go; http://www.ehserecords.com/
I can think of about a hundred worse ways I've spent 10$ & who knows, maybe someday I'll record an album tellin ya all about'em.
Posted by Siltblog at 9:56 AM