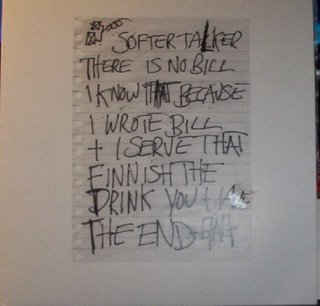 Oh how I've been longing for the day when a new round-table fulla Anglo knights would lay waste to the landscape & relegate that tired "improv" scene (or is it house chores I'm hearing? Really, when all's your doin is turnin on a vacuum cleaner it's hard to tell if yr workin or playin) into servitude. The cdr, cassette & micro vinyl market is all gobbled up w/havenots tryin to pass themselves off as haves & while there are exceptions (do I really have to name them?) most of it is pure shite. On the flipside it slays me when so many scribes slobber all over themselves to champion whatever new Fall release is in the bins as "HIS best work to date" as though MES is doin us all a favor by clackin his dentures together one more time. I'm sure some of us could go around by this admittance of "heresy" but the way I figure it, that's your problem. I guess the gist of this post is that most pinetops out there don't have a clue as to what's goin on between the cracks in the cobblestone of Ol' Blighty's Rock underground. For instance, how many out there knows about this 7" by Gag? Released on Flitwick, this record disembowels post-puh angst the likes of which have not been splayed since the era of the Membranes, Sperm Wails, Kilgore Trout & Big Flame. Not familiar? Well, they ain't names you'll find over to Pitchfork that's for sure. Gag blast outta the gate w/all the charm of an English breakfast; burnt, fried, greasy & carcinogenic. Goes down fast too. You can't help but come back for more. Within their ranks is one Leighton Crook whose also the current rhythm engineer on the Country Teasers cruise ship (not to mention skipper of the Flitwick line). I guess here is where I'm supposed to say something like the Country Teasers are the new Fall, but the new Fall is the new Fall & I wouldn't wish that on nobody.Case closed. As for Gag, there may be those who choose to see their aural fuckery as a step forward in a classic Rough Trade direction, but in my tiki lounge this mixes it up & goes down with the same potency as the strongest hooch that was ever bottled up at the Ron Johnson brewery. Gag is just one of many excellent beacons bein flickered out over the crags 'n bluffs of the U.K. shoreline via Flitwick's lighthouse. There's lot's of other great singles, (includin one by the Fall! Best thing he's done in yrs!) cd's & lp's w/the Flitwick imprint just waitin for your dormant enthusiasm to recharge. So go ahead, check it out. For a guy that don't like meat (hates animals so much he won't even eat'em) Leighton Crook sure as hell ain't no simp. He knows the difference between wheat 'n chaff. Who said vegan's can't be doozers?
http://www.flitwickrecords.co.uk/
Posted by Siltblog at 7:55 AM