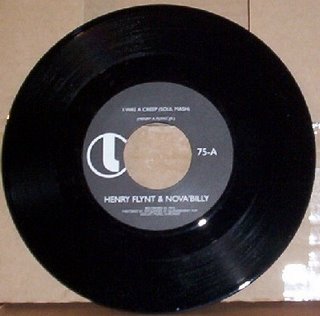 You may recall when a few yrs back the magazine Halana ran a piece by Alan Licht entitled 'Minimalist Top Ten'. In it, Al rapped about the routinely ignored & misunderstood genre then went on to list & sketch the 10 works he considered pivotal for the erstwhile collector. One of the composers mentioned was a fella by the name of Henry Flynt whose sole release at the time was a cassette only thing from '87 entitled 'You Are My Everlovin'. Needless to say, once the list was loose & ingested by the wretched excess, it was only a matter of time till that thing got the boost from obscure tape to barely available cd ( I believe it's now out of print). At any rate, it is a pretty great swell of "Hillbilly Raga" & was (presumably) the linchpin for the interest from Locust to bankroll all his further releases that I have not participated in the buying of (I got my reasons). I know I know, the guy's a genius, all his work is of such an utter brilliance & singularity & yes I'm jealous & no I'm not gay & boy is it getting late but who has all that time? It's not like I'm boycotting the guy, in fact, I just bought this limited edition of 300, one-time-pressing-only 7" by him! How I came to stumble upon it's existence I cannot recall, but the format seemed curious for such a prolific cat that I figured it was worth 6$ to check out. Culled from a 1975 concert, the label makes some whoop about this being in the 'NY no wave groove' which ain't what I heard, so I guess I just don't get it. Or is it that nowadays you can just throw out any old shit, call it whatever & that's what it is? I thought No Wave meant somethin else, but since this predates New Wave, I guess-technically- they got a point. Okay, now that we got that settled, onto the record. In regards to the a-side, if I hadn't known already it was Henry Flynt, I'd have swore it was a recording of Bob Mothersbaugh fronting 10 60 75 (The Numbers Band) from some long forgotten Saturday night stint at JB's in Kent. Those chooglin barroom blues, we've all had'em! The flip is way more curious & show's the real Rolling Thunder that year didn't belong to Dylan's revue but instead to an anonymous bunch called Nova'Billy whose solid backbeats & higher key interactions of fiddle's 'n gits reduces the white frocked, turban wearing, mime-faced Renaldo & Clara folly to the outhouse of hokum.In fact, this is so great I got an uncontrollable urge to scream 'Fuck Bob Neuwirth'! at the top of my lungs. So please excuse me while I amble down to the basement & expell my catharsis. Thank you.
( http://www.locustmusic.com/)
Posted by Siltblog at 11:35 AM

nice one 'cept i don't hear no jimmy bell! But this 45 fucking rules. Now why the fuck haven't you checked out the other shit? Dude, Raga Electric is one of the best things to have happened upon my ears in a decade!!!!!!!!!!! Don'ttell me you got some stick up your ass over buying cds! That motherfucker in question hit as a picture disc, too!

nice blog. i am going to subscribe to this.