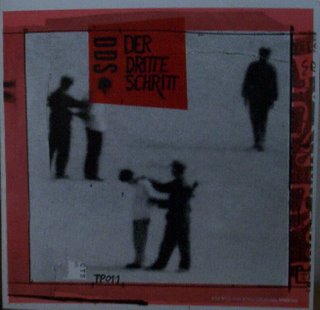 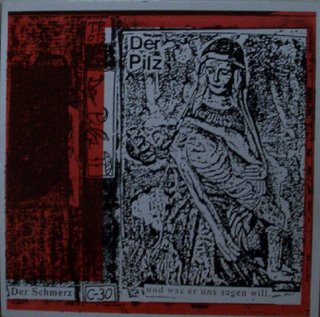 For a short spell in my salad days I lived up in Toronto & ran w/a cast of characters unlike any's I met before or since. Take for instance this one fella, Cinco Cox. He was Mexican, ran a landscaping crew & had moved to Canada to perfect a hydroponic tomato. He had this greenhouse fulla plants & would go on forever about how Canadian tomatoes was the best in the world. This was before Corona was much known outside Mexico & 5-Dicks (that's what we called him) always had ample supplies on hand. It was kinda novel, sittin there drinkin Mexican beers in a Etobicoke greenhouse, hearin all about the history of Canadian minor league hockey (another favorite topic) & why hyrdoponics was the wave of the future, all spouted off by a little Mexicali fella who-get this-listened ONLY to German synth tapes! You'd ask him what was he playin & he'd dummy up & say "eez nobody". Basically his reason for playin possum was he didn't want us to know what we was hearin. In his mind he was "protectin" this music. "Senor Woodbe" he'd say, "you good guy, but collector. Collectors like Conquistadors, only want to ruin & exploit. Be happy you hear it at all, eez very rare". Then he'd rock back 'n forth in his chair, suckin on a lime wedge, wheezing w/laughter. Some of it I knew-like Der Plan or DAF-but sometimes he'd slip something in the deck what was mysterious 'n cool soundin & then go all shrugged shouldered when you asked him who it was. It was frustratin. I remember one time listenin to some stuff that sounded exceptionally great; this primitive slashing guitar dubbed over a mush of cut/paste loops, sorta dark wave soundin. It was definitely on the minimal side, but real naif & DIY in comparison to anything on Zickzack, Ata Tak or Pure Freude. 5-Dicks of course waved me off, except to say it come from a tape label called Trummer. He made me a dupe & I used to listen to it alot in the car (my only tape player at the time). But a bunch've moves back 'n forth across the continent & things like that just go missin. I'd liked to have forgotten all about it, cept the other day I ordered this here record-strictly outta curiousity-& on one side of it was the same motherfucking jams as that tape! What're the odds on that happening? Unreal, totally fuckin unreal. Entitled Der Dritte Schritt (or DDS for short) it has been rereleased as a split lp w/another old Trummer recording artist, Der Pilz. Listenin to these sides you realize how much influence Der Plan wielded back then on the German avant/experimental synth-wave scene. It's not really Punk, not really Industrial, but yet it's both, at least by the rules in play back when these tapes originally came out (83-84). The DDS side of synth/guitar & looped crud sounds like a crude, vocalless pulverization of 'Geri Reig' while the Der Pilz side borrows Pyrolator's penchant for whimsy from the same lp & heaves it into a blender filled w/aural blat 'n samples akin to something like Decayes meets early Maurizio Bianchi. It's definitely not Andreas Dorau if you know what I mean! Pretty awesome stuff that-unless you was like 5-Dicks back in the day-you probably never knew existed. It's menacing, it's minimal, it's my kinda party. This label what released it (Was Soll Das? Platten) have a whole slew of (previous) cassette-only works from other obscure bands/artists active in that nascent German elecro Untergrundbewegung that they've bumped up to vinyl & I have yet to find a dud in the bunch. Most are micro pressings, so if yr interested, go to http://www.fusetronsound.com/
& see what's available.
Posted by Siltblog at 8:35 AM