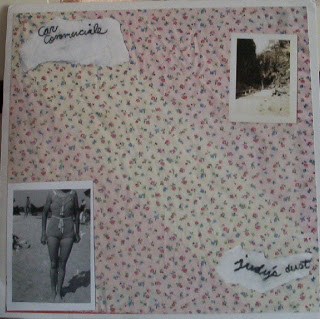 I was hopin to get a longer column together this weekend fors all you Blog readers but I done went & forgot yesterday was National Record Store Day. I'd been asked by the fella's what run the Record Exchange here in town to come & guest DJ for the afternoon, the only stipulation was 'make it original'. Comin from a couple've geeks what used to be in Strapping Fieldhands I wasn't necessarily sure what that meant, but I donned my Punsutawney Phil ballcap 'n sweatshirt, went down there & played Tony McPhee records till the cows come home. Seemed to be just the ticket. Course they couldn't pay me (cheap bastards) but I did get these here records & maybe you will too;

Car Commericals seem to feed 'n feast on a particular lost part of my youth, specifically the fuzzy grey area I encountered just after hearin Jad Fair's 'Zombies Of Mora-Tau' for the 1st time. Listenin to the 'Judy's Dust' lp it's as though them zombies which seemed so menacin & filled w/ petulance didn't wander too far from home but seemingly procreated & encouraged their spawn to go forth & if not conquer, well, at least be a nuisance to the status quo. Let's face it, zombie college is expensive but then what college ain't these days? Um, so.......yeah, Car Commercials come across on this 1st lp like charmed replicants w/exact DNA to match Jad's mythical zombo's of yore. True, this generation's 'disturbance' might seem mellower, but somethin tells me if you scratch a little harder there's a hornet's nest of dread under there that'll stand your hairs on end while your runnin for the hills. So go on, dig deeper. A case've the creeps can only do you some good. Check out www.geocities.com/leafleafrecords/ or www.cenotaph.org for ordering info.

And while's I'm on the subject of myths, the ellusive Billy Bao has hit for the vinyl cycle recently w/a lp, 10" & 7" all in the space of 6 months. I'll be goddamned if he ain't somethin of a modern day Matty Bower w/all that hoopla. But it ain't just the line formin to release work what's similar, to my ears Billy Bao's soundin somethin like a latter day Skullflower. There's also a bilge like fodderstomp that bring to mind Flipper or someone of that ilk too, 'cause on the 'Fuck Separation' 10" it feels like they meatballed Ted Falconi's guitar into a jackhammer & pulverized the Xaman lp into smithereens while the 'Accumulation' 7" hoists 'Brainwash' onto a petard, detonating it into a billion sub atomic particles that seem so toxic, you'd swear the air was filled w/a sinister amphetamine powder. Guess what? It isn't. Both of these most likely available from; http://www.s-srecords.com/ or if your just lookin for the 'Accumulation' 7" try; xeroxmusik@gmail.com

I have seen some of the best minds of my generation get downright dippy when they talk about this new lp by Hospitals entitled Hairdryer Peace. That said, some of these yappers would also say 'no' to a Kobi beef burger or Porterhouse steak cause they is scared of meat while others have confided they could eat nothin but confit of duck everyday for the rest of their life. So the lines is drawn. Which side is you on? All's I know is that this here lp ain't nothin like the previous 3 outings what bore the name Hospitals. Personally I think Mr Stonehouse's time in Sic Alps (or at least what he took from the Pleasures & Treasures lp) made an outstanding impression. The punk yap that always felt so unfocused (or raucous for the sake of raucousness, aka 'break shit & be somebody') has been given the boot on Hairdryer Peace. There's a trebly high end fuzz encircling this like an anxious halo which led me to suspect that it was more a solo work than a band effort. And I was sort've right, but I was also wrong at the same time. Two of the participants said they could hear no discernable contributions on their part, even though they agreed they was on there. The final verdict was that Mr. Stonehouse made this lp a personal catharsis & while there exist's a skeletal framework of how the album started, what come out in the finish was a completely different animal. Way too many folks nowadays set out to make (what they think is) weird lp's the results of which are almost always terrible, dilletantish, ego driven affairs. Intending to use classic outsiders like 'Oar' or 'Twin Infinitives' as template's for your masterpiece in the making might seem like a good idea, but in the immortal words of Tony Baretta, 'Don't do it'. Take your 4 track down to the pawn shop, sell it & invest that money in a good lawn mower. I'm not kidding (you can thank me later). However, what if someone unintentionally fused the two works together, ventral & dorsal like, creating an awkward yet remarkably unique vertebrae of sound? You don't have to be Julian Cope (10 years from now) to know that's what's happened on Hairdryer Peace. It don't exactly sound like neither, yet I see both them apparition's drivin this buggy just as clear as day. As far as best of list's go, the year's still young but if your askin me about singular & detached, hell, the 'competiton' is but a cloud of dust in Stonehouse's rear view mirror. Give that man a beer. Or at least a hug. Reach out to http://www.hairdryerpeace.com/ & procure a copy.


'The Howling', release numero deux by Jerusalem & The Starbaskets, sees the erstwhile duo of Kim & Jeremy embarking on a journey out of the virtual port of Christchurch into a pastiche of many seas & shores, none of which seem to have either onset or offset along their coastlines. Nor do I see any nuns flying overhead though there is the occasional flutter of the sails that might betray the lonliest sailor to pine otherwise. One might conjure that somewhere in the horse latitudes between this & that 1st split lp, JAtsB misread their sextant. For some that can be fatal, but these guys came out of it okay I reckon. Sure there appears to be a Magnum force drivin the ship that I'd hoped wouldn't happen but at least it weren't no mutiny where they was turned into slavery as a White Stripes derivation. Thank heavens! Cherish the good, cherish the good. So with that sentiment in mind, if these two wanna cavort w/a collective of elephants, who am I to question? I should say I really dug the last track on side A which sounded like they splayed Tommy James & The Shondells 'Draggin The Line' & used it for catfish chum in the Big Muddy. 300 pressed, get it via www.myspace.com/jerusalemandthestarbasket
Posted by Siltblog at 9:27 AM

Unknown said...
This comment has been removed by the author.
3:50 PM

Unknown said...
This comment has been removed by the author.
11:59 PM