If You've Got Nothing Nice To Say, Well, What Else Is New?.....Some Readers Speaketh! 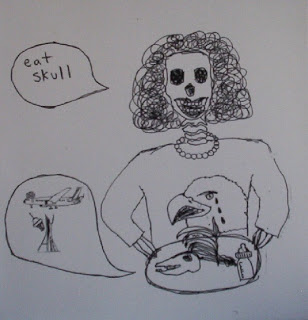 Lot's of folks been writin in complainin about the lack of post's & offerin up their 2 cents. Normally I'd take it in stride but they's got a point about the truancy of my opinionatin. So I figured I'd turn over the spotlight to some of the one's that seemed most....concerned. Nice to know I got such vociferous readership & I'll admit it's a relief that none of'em is within hatchet distance either. And I mean that literally. I'd hate to have to show'em up w/my backwoods prowess. You ain't gonna get many smartass letters wrote w/yr head chopped off is all's I got to say in my defense. But I ain't nothin if not democratic, so's I'll turn the forum-such as it is-over to the huddled masses. Read'em & weep!


Dear Siltblog-
I have been a loyal reader of your blog as well as a longtime supporter of the Siltbreeze label but sometimes I have to wonder about some of your executive decisions. No, I'm not talking about the Resineators cd (though an explanation of that WOULD be appreciative), but whose idea was it to have your blog controlled by such a narrowminded jackass as Roland Woodbe? Is he really an idiot or does he just play on for this blog? I don't mean to get personal, but I (for one) am getting tired of seeing my borough-Brooklyn- get trashed on such a continual basis. Let's not forget, the New York Times penned Philadephia as the 6th borough not so long ago. Maybe Mr. Woodbe was too busy sucking off a goat to notice that one. I think it's criminal that Siltblog has never made mention of the amazing Religious Knives who are far & away the best band in the area. But I guess rising from the ghetto of new weird america doesn't count. Too band for you guys as you are missing out on a unique assemblage of sounds that access classic NYC minimalist's (Conrad,Niblock), vintage Krautrock (Cluster, Harmonia) as well as some of the veritable keyboard driven South Island artists you all seem so giddy about (Scorched Earth Policy, Snapper). Their most recent release is even recorded in Philadelphia, at Big Jar Books. Oh, I get it, you probably don't read books. Well, this isn't a book asshole's, it is a fucking AMAZING cd & I'd bet almost anything that neither of you were in attendance because, who knows, there was probably paint drying somewhere in town that you had to inhale. Get over yourselves! Listen to Religious Knives, I think you'll like what you hear. And you'd come to the hard conclusion that not everyone in Brooklyn is clueless & full of shit. Like you!

I likeded it when that guy called you a hillbilly ratfuck. Cause u r 1 duuude. Who else would completely miss the boat on such an amazing 7" ep like the one by Mayyors that just came out? What's the matter, you didn't get one for free, you cheap toothless snakeshit! Man, I'm hear to tell your retard ass Mayyors is takin over. My boy Chris Woodhouse OWNS on this one. Forget what you don't know about Karate Party & everything else he's been involved in, this one is the massive donkey punch that kills the lights & the fun. Front-bro John Pritchard ain't no slouch either (that's your job), these 2 Sactofornicators fuckin shred it w/all sorts of effects & shit, sounds like the Pop Group & Killing Joke beating each other with lacrosse sticks inside the engine of a 747. But what the fuck do you know about partying? Tell Psychedelic Dogshit they can suk a dikkk. Sacto punx rules, Siltblog drools!
PS-thanks for the tip on Titmachine. Those girls r HOTTTT.

Many welcomes from Sweden where some of us love the writings or musings for Roland Woodbe. Not so much to read about on us from Siltblog, we can hope that new 7" by Black Bug will make this okay. If you do not know, Black Bug is dangerous & dark 2 piece of Lily & Ruslav playing very LOUD guitarr, drums & synthesizers. Also singing, who can forget! Lily is most intense vocalist but is also with dark humors I think. 'I Don't Like You' is fantastic loud punker but 'You A Grave' is death dancefloor hit of 2008. For me, is darkest, funniest song from Sweden since Leather Nun's 'Slow Death'. I am not for saying anything negative about Brainbombs who are of course legends, but is hard to know now how important the 'No Rules' ep was when it was unleashed so long ago. Black Bug have same blood pouring through veins & for only 2 people, you can be amazed how menacing sound can be. Funny, is available from Italian label who only to make 250 copies. I think is criminal, so hurry to get one. Keep up best works.

Hey, why so lame? There for a while you were like the best thing to read on the internet but what happened, you start takin that shitgaze shit seriously? I really wanted to read what you had to say about the new Eat Skull cause I hear Siltbreeze is putting out the lp (I'm personal friends with Rob, the main punk of the band). I remember some sadassballsac writing you a letter or something about the 7" on Meds. I couldn't tell if he liked it or not, but I'll assume it was a good review. Not that it matters a fuck to me. Eat Skull are the BEST! I like Little Claw alot too, but it's like comparing weed & hash, you know? Just depends on where your head's at. Mine is way up Eat Skull's ass, especially after this great 7" ep on Skulltones you seem to know NOTHING about. Dude, you are so missing out. 'Dead Families' is only the ravest tune yet this yr & while I love the bleating organ fills that sounds like a monkey's stuck dying inside it, that bass bridge is just too cool. And who the fuck does a Psycho Sin cover in 2008? And kills it? Take a wild guess you east coast turd gobbler. If anybody could be counted on to nail a cover of the Nubs classic 'Job', Eat Skull get my vote. The last track on here is really amazing, reminded me like that tune 'Whiter Shade Of Pale' that my dad used to listen to after he fired up a bowl in our basement when I was a kid, except this version sounds like someone ripped out the dude from Procol Harum's vocal chords, dredged them in cocaine, fried them up & fed them to Rob after him & Rod had polished off a case of beers. And he would have eatin them too, cause NOBODY embodies the true PUNK spirit like Rob Enbom. Fuckin 'ay. I know that lp is going to rule, so don't fuck it up or I will hunt you down & roast your fat carcass over a spit. EAT SKULL + PDX 4EVER.

Tammi Tearduct, Portland, Or (sold out at source, try http://www.midheaven.com/)
Posted by Siltblog at 9:39 AM

Fernando Pessoa is turning over in his grave. He mumbled that the Southern Kiwi Skuffle will always trump the New Weird Americana and if my ticker was still beating I'd put up the Euros to reissue the Max Block EP.

Jesse said...
This comment has been removed by the author.
11:53 AM

everybody gots lots to say..