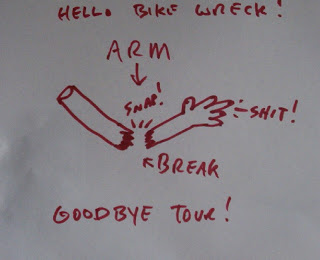 SAN FRANCISCO-Late last week, Sic Alps Matt Hartman was involved in a bicycle mishap which resulted in him sustaining a broken arm. Rumors that he was rushing to meet friend's Jack (last name unknown) & Diane (likewise) to suck on some (tofu)chili dogs behind the Tempeh-Freeze remain unsubstantiated. Hartman is a known carnivore & there is a contention that if in fact he was speeding to meet vegetarians, it was the result of him being-in the words of Hemlock Tavern booking agent, Anthony Bedard-'a good guy'.
'Matt has a lot of friends' remarked Bedard, 'it's possible some of them don't eat meat. This is San Francisco after all, you have to expect that'.
Hartman & fellow band member Mike Donovan have decided in light of this untimely accident to cancel their upcoming May tour of US. Said tour is expected to now take place in July. Stay tuned to Siltblog for further details.
Posted by Siltblog at 7:47 AM

When it's 100°F in Sacto and I'm lying on the floor watching the ceiling fan spin around, that is like serious drugs to this "straight edge" "youth"...And there's surely nothing I'd rather listen to during those times than Sic Alps. So breezy and laconic, yet thistly and exfoliating. How could a drummer and sound architect so mellow be such an SF bike kamikaze?!?! Damn...