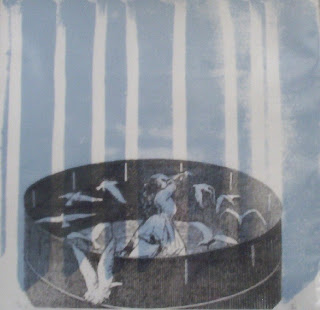 One of my Marine bud's from back in the Vietnam days(I done a tour there in '71) come up to stay w/me for a couple weeks, so say hello to Bill ('Bull') Turley. We's know each other since boot camp & has got into all kinds of scraps together through the yrs. One of Bull's favorite motto's is 'I'm damned if I do & damned if I do'! Get about 15 shots of whiskey in him & that's about all you'll hear too. And don't even think about takin that Pink Floyd record off unless you's is lookin for a fight ( 'Atom Heart Mother',Camp Pendelton, Ca Nov., 1970 & 'Animals'-8 track version-a car, US Route 52, just outside Morrisville, Ind., June, 1977). Anyways, I played this here bunch of new singles for him & this' what he had to say on their behalf. He's also fond of making recommendations, ie., records HE'D rather hear, so I've include them as well;

"That's a good lookin Porterhouse they got on the cover. It's hard to tell if it's the same one on both sides but I reckon it must be. What kind of a fuckin idiot would buy 2 steaks just to put'em on the cover of a 7" record? Remember them steaks we had that time in Japan just before we got rotated back to SD? Them was Kobe & the Japs that farm'em give'em whiskey, beer, massages....and they ain't even officers (laughter). Not a bad life.....till they put that bullet through yr brain when you don't expect it. No sir, them Kobe cows live pretty damn good. Better'n most folks I know & to tell you the truth, I'll take the cows over the people any day! Cows don't talk back. And you can eat'em. Are the Meister Brau's cold yet"?
(Recommended listening; Montrose- 'Jump On It')
http://www.nodoctors.com/

'Little Claw huh? Does Little Claw got a camel toe (much laughter)? I like'em, she reminds me of that singer Diamanda Galas for some reason. Now that woman could scare the pecker off a fella if he weren't expectin it. The band's good too, I'm thinkin they sound like that Swedish one, Butter Utter. Now there's a band what shoulda made an album! Diamanda Galas + Butter Utter=Little Claw. I like this new math (laughter).
What's the deal w/this Michael Yonkers dude? People say he's not to be ignored but in this case I'm willin to make an exception".
(Recommended listening; James Gang-'Rides Again')
http://www.x-recordings.com/

Tickley Feather/Bermuda Triangles-Split 7"
"Well she sure is a cute little thing! How come her legs is blue? Is she a hemophiliac? Yeah, I can see the Gili Smyth angle you was talkin about. How come I keep thinkin of the Y Pants? She's got a psychedelic DIY thing goin on even if them shoes she's wearin on the cover look about 10 sizes too big. Maybe that's all she can afford. Weirdly charming. The Grappa I mean (laughter).
This Burmuda Triangles guy looks like the Egyptian fella at the smoke shop I go to that's always tryin to sell me Shermans. And everytime I says to him, 'NO THANK YOU. IN THIS COUNTRY WE SMOKE MARLBOROS'. This ain't doin it for me. I keep thinkin of Skafish & for once, that seems like a good idea".
(recommended listening; Yes-'Relayer')
http://www.cnprecords.com/

"You know, when all the people talk about Chrome & the 'Chrome Influence', what they mean is the Chrome from 77-82. But there was them albums that Damon made as Chrome in the mid/late 80's that folks tend to forget about.Not the Amoeba Men! You get to believin somethings good-even if it ain't-& then next thing you know, you've sold yourself on it. Remember that time you brought back that Classix Nouveaux 12" ('Inside Outside/Every Home Should Have One) & tried to convice yourself it was good cause you'd spent money on it? Man that was hilarious (much laughter)! That record SUCKED! This Amoeba Men record is ALOT like that time, except we know better. And it was free".
(recommended listening; Rush-'2112')
http://www.cnprecords.com/


"What's the deal w/all these split records? Is the bands so cheap they can't fill up 2 sides? For once here's a couple I'd like to hear a lot more from. These Tyvek boys really remind me of 'Never Been In A Riot' era Mekons. 100 what? Oh, 100 Flowers, sure, there's some of that workin too. Really good stuff. And you say the other bands from France? Please give them my sincerest apologies (laughter). Now these guys know the GOOD Chrome records. This' kinda like something from the 1st witchy mix off 'Alien Soundtracks' before it got fucked up or condensed or whatever happened to them subsequent pressings. I'm headed over to France later this year. I've always wanted to see Normandy Beach. Maybe I'll get down to liberate Paris for these guys while I'm there (laughter). This one's a keeper.
(recommended listening- Roxy Music-'For Your Pleasure')
http://www.s-srecords.com/


His Electro Blue Voice-Fog/Das
"Remember the Rough Trade shop in San Fran?. Great store, all kinds of weird shit that you'd never find anywhere else. That's where I got the 'Nag, Nag, Nag' 7" back in the day. I went there one other time around '85 or so & it had moved. Still had some killer stuff, like this one 7" I got from an Italian band, Rivolta Dell' Odio, that had the most amazing post industrial, creeped out Goth thing goin on. Just totally fried shit & I ain't never heard anything like'em before or since. Till now. These guys nailed it. And they're Italian too? This is like the 2nd coming of the 'Il Cuore Della Bestia' ep! Amazing. Where does the S-S Records guy find this stuff? Hey, more power to him. He ain't shit the bed once this year. His Electro Blue Voice huh? The names a little....you know what....but they tear it up. Keep'em comin!
(recommended listening;Hawkwind-'Hall Of The Mountain Grill')
http://www.s-srecords.com/
Posted by Siltblog at 10:22 AM