There Once Was A Band From Nantucket.....Even More 7" Reviews! As Limericks! 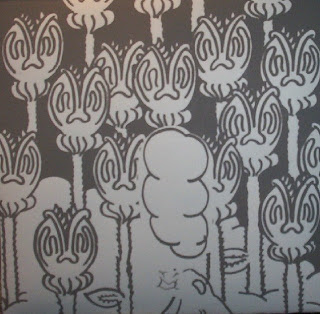 It's a deluge! I surrender! Really, I keep gettin more 'n more 7"ers for consideration & it's all's I can do to keep up. I ain't complainin, but this time I gotta farm'em out & since my ol buddy from Pittsburgh Lester (aka 'Ding Dong') Dell's in the house, the job goes to him. PGH's a funny place, some folk's from there make claims it's East Coast. So does that make St Louis the West Coast? Anyway, Ding Dong don't subscribe to no formal narrative, he's a limerick genius, so I gave him a bunch've records to see if he could pen some originals for us. Here's what he came up with;


Junior Makhno-Theatre Of The Macabre ep

Junior Makhno is some growlers from France
Grindcore has them caught in a trance
If you like broken bones
Harsh noise & metal moans
This might put a load in your pants
http://bruit-direct.org

This bunch hails from Iowa City
Where 'pussy' is still the name for a kitty
They try & sound weird
No doubt it's a beard
Drunk from eggnog sucked outta his grandma's titty
www.gilgongorecords.com

We Are The Arm-Cares ep

What kind of name is 'We Are The Arm'?
It's okay, no cause for alarm
This one is so good
You might even get wood
If your pecker was seduced by their charm
www.wearethearm.com

Roland Woodbe wrote about D. Charles Speer
Whose LP he said was quite clear
Oh this single he goes
With darning needle & sews
Two Burl Ives mittens from the foreskin of Roosevelt Grier
dcharlesspeer@gmail.com

This one's from a label in LA
Which in the future will be totally gay
Imagine Mr Spock
Fellating Captain Kirk's cock
While getting fucked by a Klingon deathray
http://www.dntrecords.com/

Best post ever, which is saying a lot. Bravo.

Someday Tom I'll package a 7" in a Primanti Bros. Pitts-Burger Chesse Steak #2 best seller just for you. But its gonna cost ya a kegger of Yuengling Porter.