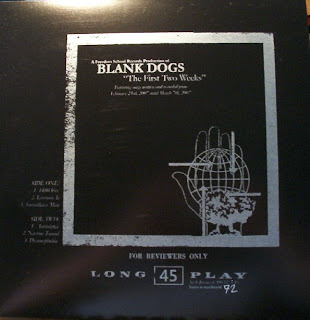 There's many pate's of sputtering electro-junk brimming from terrine's via la underground Francaise as of late. What's more, they's all seem to be baked in Chrome ovens, or at least one's assembled to approximate specifications. The same can be said for a bevy of other likeminded Rhinelanders as well.Not that it's a bad thing. Far from it. Keep the kids creeped out 'n rockin I says. So it was w/great interest & slight amusement to me when I picked up this here 12" from Blank Dogs-hailin (I think) from the Brooklyn area- and the 1st thing what come to mind was Metal Urbain. But that's 'cause I was spinnin the b-side. Pretty snazzy if you ask me. So I flipped it & wah la....I dunno, Dr. Mix or Metal Boys. How a fuckin 'bout that? Hell, even the name Blank Dogs seemed reminiscent of one of them early French Punk bands like Asphalt Jungle or Warm Gun or somethin. I had to laugh! While's all them over there is squirmin to command Edge/Creed like gruff, Blank Dogs done gone & cranked out this bristler of Debris/Schwartz studded grime. And I suspect it's the work of a lone marksman too. Which calls to mind another solo debut by a fella what called himself Big Black who yrs ago made a similar dramatic debut called 'Lungs'. I can't say if they's destined for a similar path-or that I'd wanna see'em head that direction-but so far Blank Dogs is blankin the competiton & this kinda heat don't show up to the park every day. Limited edition of 490, hand numbered & screened too, get'em at; www.myspace.com/freedomschoolrecords.
Posted by Siltblog at 8:56 AM

When Wow Gold wolf finally found the wow gold cheap hole in the chimney he crawled cheap wow gold down and KERSPLASH right into that kettle of water and that was cheapest wow gold the end of his troubles with the big bad wolf.
game4power.
The next day the Buy Wow Goldlittle pig invited hisbuy gold wow mother over . She said "You see it is just as mygamegoldI told you. The way to get along in the world is to do world of warcraft gold things as well as you can." Fortunately for that little pig, he buy cheap wow gold learned that lesson. And he just k4gold lived happily ever after!.

A slim, wide-eyed mygamegoldwoman almost human in virbanksfeatures eyed agamegold the pair. Her nose was sharp, but very elegant. She had tbcgold a pale, trade4gamebeautiful face the color of ivory, and veryge for hair she wore a wondrous mane of downy feathers. Her gown fluttered as she walked—on two delicate worldofgolds but still sharply-taloned feet. “Awake, awake you are,” she said with a pvp365 slight frown. “You should rest, rest.” Krasus bowed to her. “I am ezmmorpg grateful for your ighey hospitality, mistress, but I am well enough to continue on9a9z now.” She cocked her head as a bird might, giving the mageltk365 a reproving look. “No, no…too soon, toogold4guild soon. Please, sit.” The duo looked around u4game and discovered that two chairs, made in the same ready4game fashion as the nest, waited behind happygolds them. Malfurion waited for Krasus, who finally nodded and sat.