So Close To Texas, So Far from God.....Los Llamarada's 'The Exploding Now' LP 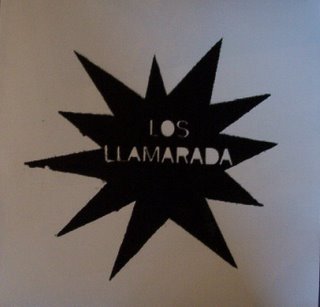 This letter arrived late last evenin wedged inside an empty bottle of Prell shampoo what came wrapped in an old Fedex cylider. At 1st I didn't get it, then I split the container in half & out fell this note. Scrawled on deli wax paper & smellin of onions, I couldn't tell if it was scribbled in hash oil or bong resin.Since it's from Nathan "Kunta" Korte, an old surfin campadre of mine, it's a safe bet it's one or the other. Don't sound like he's changed much over the yrs. He's still got that good ear though.

What the FUCK is UP Bro-hams? What's the werd up there in Smelladelphia? Dude, like I'm fuckin KICKIN it down here in Baja bro. It's SWEEEEET! Met some righteous bro's who know the waves well & the smoke. Tres coolage. Did Scorpion Bay & it was sick! Later I was like all (illegible due to smearing) & this dude Scotty's dick in the campfire that night! It was like a flesh mashmellow & it fuckin STANK. I was like-YO! Some maximum uncool vibes. Too much mescal, not enough herbage. Yo, you know me, I'm always like, 'whatever get's ya hard' & all, but Scotty...I dunno dude, I don't think he fuckin digs that shit. You know what I'm sayin? Fuck it though, ya know? It's a party. And I am but a fuckin vessel. Right on!
So I seen that SXSW report. You dude, what the fuck-a BLOCK of Leb hash? Are you fuckin NUTS? Snotbe, you are a fuckin MONSTER dude! I fuckin love it! Wh (Illegible) bum's hand. Them TNV kids sound gnarled up. Do I know Ranger X? He sounds like an evil bro. Claymore's scare the fuck outta me. That's some sick mojo.
But check this out, that band you were fuckin diggin, the Los Llamarada's? Dude, we got their lp! It came fallin outta this pinata. Dude it was soooo twisted, this thing was filled w/doobs, painkillers, speed, hash oil tinnies & this lp. All of it spillin out & I was all like 'Holy Shit'! I got fired up & then was like checkin out their sound & fuckin thought of you. Their gnar-gnar is eerie & jammed up in some black hole jabber rot, alot like (as you said-yr fukin good Couldbe) Earcom era Prats face-first stumble forth ack-ack-acktion. And like the fuckers you work with-Der TPK and Times New Vicodin & even them Shadow Ring dudes-there's no fuckin pretense. It just IS. You either wrap yr brain around it or it's like, ya know, fuck off! There was this sticker on mine about 3 (illegible. sorry, much of this letter is smeared beyond comprehension) panese anymore? That was like, what 30 yrs ago or something? But fuck, that's cool, the dude get's it. I gotta get over to Monterrey & see these fuckers. I bet they're radilicious. Fuck you for seein them 1st. Ju (illegible) ng. How did that S-S dude find them? I bet he's fuckin stoked. It's a baked lp dude, fuckin serious carnage gettin laid out. I wish I had 8 thumbs so I could stick'em up in the air like a set of dog tits. RAAAAAD!
Man, you gotta come down here bro-daddy. You still got yr board? Dude, I thought I seen yr (illegible) her in Belize? That creeped me out to the max.
Anysnooze, Los Llamarada's LP. It's cooks. Like a spoon fulla the sweetest China White & just as addictive. And it's fuckin pressed on white vinyl too. What's that word, sublimasomethin? Fuck it, you know what I mean. This shit is wiggin me out! I gotta motor dude. Stay high or say goodbye. Later daze Spudbe!

Eight dogtits up is surely the best and funniest concise endorsement I've enjoyed reading in a long time. Surely had me roffling at the office just now.