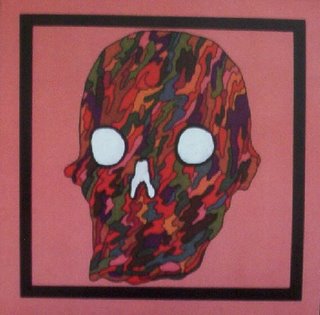 I got a whole mess've 7"ers layin around what need to be sorted out so here goes.

The label's description of this read like I was in for a Psychedelic bumout so when it arrived & my ears proved to me it weren't the case, I was a happy lad. Sic Alps masterfully layer their crud for the short & sweet on here, the results bein a Whoopie Pie concocted w/ingredients culled from a recipe involvin Wire, Strapping Fieldhands & Tyrannosaurus Rex. Who makes up the crème filled center is unknown. I ingest shit this good w/my eyes closed. The best Skulltones release thus far.
(http://www.sicalps.com/ http://www.skulltones.com/)

Don't know if they's dumbin it down for the KBD collectors out there, but Clockcleaner's cover of the Remo Voor classic is as solid as bacon on a burger. Singer John Sharky even perfected the english-as-a-second-language vocal quiver for more authentic Euro-trash inflection. Sounds like they made him sing it while sippin schnapps on a stair climber. Hey, whatever it takes, right? The flip is more familiar territory, replete w/leering angst & rhythmic saunter, you just know trouble's on the loose. So when they go & set fire to a shed full've No Trend corn dogs, you can't help but cheer'em along. That kind've menace ain't around much these days, so it's good to know there's at least one bunch've sonic vigilantes doin their part. Chalk up another winner for Alap Momin & Faggot Fishsticks.
(http://www.testostertunes.blogspot.com/)

I think there guys hail from somewhere in Oregon but their vim & vigor don't remind me in no ways of a band w/a Pacific Northwest return address. Rather, it sounds like they was weened on a ranch somewhere's in the midwest, halfway between Lawrence, Kansas & Cleveland, Ohio. Which might explain why they's resemble a mix of Starvation Army & Mortal Micronotz. I dunno, it's a decent stop for a breather but I don't feel like stickin around till dinner. My metabolism ain't what it used to be.
(www.myspace.com/meercaz)

Yet another free wheelin cadre of Black Velvet players whose names & nodes overlap in both Sapat & Kark. On the a-side they shine w/the playful dexterity akin to a riverboat William Breuker Kollektief while the flip hovers & rumbles like an ICP rehearsal inside a storm cloud. In fact, if you'd told me this come from one of them old ICP flexi's I wouldn't have flinched. Dedicated to the memory of the late, great bassist David Sauter whose presence & determination helped make up the core of the Black Velvet Fuckere aesthetic. Long may they chooge.
(www.myspace.com/crappynightmaresville)

Marcia Bassett & Pete Nolan is like the Lon Chaney & Boris Karloff of the New blankity-blank whateveritscalled. They's both don various sonic disguises within the genre of which they are synonomous & are lauded 'n championed for their efforts. As well they should be. In GHQ they appear together, along w/Steve Gunn (ex Pancake Flipper) & the results here (culled from a live performance) have a lovely, sustained, minimalist/psychedelic vibe that must have been beauteous to behold in person. I'd like to hear more. Ex Cocaine deviate from their smokey guitar-lead folkest freakust for a few minutes of sustained free hand drumming that's impressive enough that the Ouija board was tricked into spellin out the name M-i-l-f-o-r-d-G-r-a-v-e-s. Their next lp is gonna be right here on Siltbreeze & if you ever wondered what a cross between Dead C & Stone Harbour would sound like, you'll have your answer in May.
(http://www.notnotfun.com/)

Superb out there electro/percussion free-ride from a new to me Finnish duo. It's dense & loose; the electronics circle & dive while the drumming keeps a cockeyed yet steady time sorta like what you imagine 'No Pussyfooting' might've sounded like if a tipsy Jaki Liebezeit had invaded the sessions. Supposedly only a 100 of these worldwide. If they's got anything else available, my door is open.
(http://www.octanegrammophon.com/ http://www.fusetronsound.com/)

If there is one genre nowadays that I'd absolutely dismiss it's be Hardcore but every now & again I come up against someone's what makes me eat my words. This time it'd be this awesome quartet outta Olympia, Wa what call themselves Sex/Vid. They got a great halcyon sound that recalls the action found on the ground floor of Fatal Erection, Touch & Go or Dischord back when 3$ ppd. meant somethin. If I hadn't heard it myself I'd have never thunk it possible. I'm impressed. Ding! Score one for the punkies.
(slucas666@yahoo.net)
Posted by Siltblog at 10:32 AM