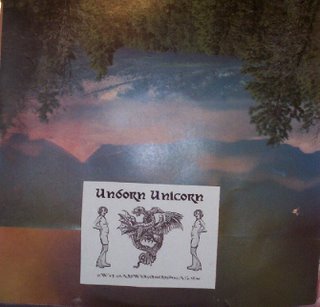 At the risk of losing a fistful of transparent readers, I hereby admit that I have not been payin that much (as in no) attention to the latest releases of everyone's favorite white knight, Sir Jandek Of Corwood. So if I'd incidentally heard this Unborn Unicorn lp-say, at an exclusive brandy tasting showcase-& been spoofed by someone that it was the J-man's latest, I probably wouldn't have questioned it (not right away) & continued to fill my snifter. If however it had been brought to my attention beforehand via an enthusiastic dorkus as "an lp by a gloomy lo-fi Folk/Psych dude" I'd have no doubt chortled my drink & exited the premises forthwith. I know, you can't take me anywhere! But who want's to deal w/such vague vanity-driven irritations when attempting to grasp the subtle complexities of a fine Napoleon or VSOP? Those things cost a fortune (the spirits I mean, but shitty Psych records ain't cheap neither)! Thankfully no such event was takin place. Not on a grand scale anyhow. It was just me, a bottle of Calvados (for the throat, I've been feelin poorly), 2 cats & this Unborn Unicorn record. Bein a nice day 'n all, the feline's was screamin to go outside. Their caterwaul was sorta like somethin off one of them Magik Markers cdr's you'd find wrapped in a brown paper sack. But bein cat's afterall, they got an excuse. Once I got'em out the door I was waitin for the suck to start on this Unicorn record. But it weren't to be. The thing fluttered, got a good gust of wind behind it & remained airborne over the entirety of both sides. Now I ain't sayin it was flyin high-not w/all the junk he's got onboard-but it's trajectory could shave a head or two from the level it maintains. The Jandek thing was only a minor, initial gripe-like when you think you smell gas but it's really cat piss-& once it settled in, it started takin on a creepier Cali desert kind've vibe. Like if Bobby Brown had a stalker 'cause some dusted trust funder thought he heard the voice of God on 'The Enlightening Beam Of Axona' lp & wanted to take it back. In also made me get up, go find (& play) the Ziggy Stardust Band lp-not Bowie, but in fact the work of a bonafide schizo who thought he was-get this-Bowie's brother! It exists, just ask John Allen-where everything comes overloaded to the max, the result bein sort've slurred & fuzzy. In that way it also resembles the Michio Kadotani cd 'Rotten Telepathies' you know, 'Ultra Pyschedelic' & what have you. I just realized, in all these comparisons I ain't yet mentioned someone that seemed to possess even a modicum of social skills. And I guess Unborn Unicorn weren't no walk in the park neither. Goin under the human name of Aaron Coyes, I heard tell this guy was just about as annoying of a guest as you'd ever not want to visit while he was over in Australia makin this record. Some claim he'd set himself on fire just to get a beer. Man, I hear that & all's I can think is...I miss the Bowery! Imagine if you was to go back & give all them bums there guitars, effects petals, hook'em up & yell 'PLAY"! Some say that's how CBGB's got famous but that kinda revisionist history I ain't into. Yet. That said, this Unborn Unicom lp is a pretty great land-on-your-feet contemporary addition to the pantheon of muzzy solo panhandlers who like Icarus, flitted close to the sun long enough to leave a startling imprint before crashing back to earth in flames. I guess what I'm sayin is I doubt the next effort will add up to much, so if he stops now, at least he's battin 1000%. And there ain't everyone can say they did that.

(Get the lp stateside via www.flippedoutrecords.com, contact the label at; heardworserecords@gmail.com)
Posted by Siltblog at 3:15 AM