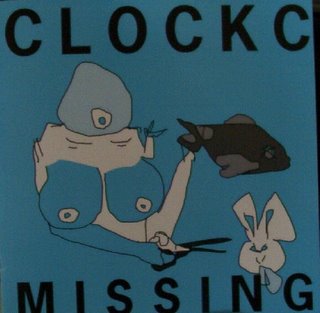 According to the history books adorning the shelves in my Kung Fu library, the Hardcore movement (proper) went up it's own ass real quick. It was a coast to coast bacterial breeding ground for doof's 'n load's alike. Once, that was a good thing, but when the preachin started & commandments were written, it was time to check out. I mean, when a label like Revelation becomes IT w/their patented brand of suburbacore, you gotta come to the sad realization it ain't about the "freshness" of the music anymore. But I was gone long before then. Personally, I always went for the bands that were less concerned about speed &/or point of view & more into wreckin 'n rebuildin their sound. Some scribes called it Artcore & there was bands that were outstanding provocateurs of this idiom, deliverin bucketloads've bodacious sonic sputter. The (early) Butthole Surfers was one. Pilgrim State, Kor-Phu, Chemotherapy, Mecht Mensch, Spike In Vain...their all at the top of the list too. They blurred a lotta lines, used delays, feedback & all sorts of gadgets to fuck w/heads 'n sounds, creatin great walls of skree & glee that were championed by the phantom few. The intention might've been Hardcore, but what got delivered was greater & more complicated than that. Clockcleaner are a contemporary (& local) band that subscribe to that same all-but-lost damagery. The science is a little more advanced in their attack but if I stand far enough away from the speakers, it sounds like it could be, ya know, almost 1982 ('83 at the latest). This new 7" by'em is a good place to start. The sustained tension that the rhythm section builds is superb 'n stuccoed over that is mounds of lush psychosis whipped up by stinging guitar, vocal scrunch & extraneous add on fuckery that gives it a singular edge.It ain't no New Weird America, ain't no Noise Underground, ain't no none of that. They ain't got no name yet for what Clockcleaner's up to. No good name anyway. Dimmer bulbs & flatter feet have opined about'em being nothin more than an extension of 90's noise rock bands. Wow. Hey, I only got two cents invested so all's I'm gonna say is that this record woulda sounded perfect on the Special Forces label, sandwiched in between L-7 & Blight. And not (just) because of the Crucifucks cover either. If you can't unscramble the code, that's okay. You weren't meant to. To everyone else, set coordinates for http://www.hitdatrecords.com/ & I'm over 'n out. Roger that!
Posted by Siltblog at 1:59 PM