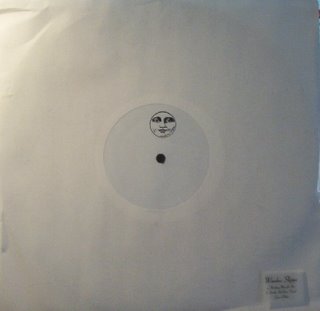 It's not every day that a free 10" record shows up in the post & it's an even rarer one when said record is actually good. Did I just hear something about a tornado watch? Figures! Sure I got my share've lathe cuts + a variety of who's who releases on the format-which had a short spurt of vogueness in the mid 90's-but really, thinkin back, I cannot recall more than the obligatory couple've plays before they was filed away till time immemorial. Look at'em; Noise Addict, Budd, Tono-Bungay.....not exactly names that scream Murderers Row. And there's loads've others, it's just too painful to go through the list. So I figured it'd be hard to muster great enthusiasm for this Wooden Shjips 10" on account've the legacy of mediocrity left in it's wake. But I'm nothin if not open minded so's I played it straight off. That was almost a week ago. It ain't left the turntable since. Hailin from the SF area, Wooden Shjips seem to have their wagon hitched to a post psychedelic/punk damaged Krautrock environ that just not enough people are astute enough to homestead. The 1st track 'Shrinking Moon For You' has tremendous sustained guitar (+ talent button accompaniment) as well as primal repetitive bass that recalls the warmer fuzz destruction moments off've Guru Guru's 'UFO' lp while the 2 on the flip-'Death's Not Your Friend' & 'Space Clothes'-sound not unlike something you might hear on a Zick Zack label mix tape or better yet, outtakes from the S.Y.P.H. s/t double 7". Dieses ist die wirklicken Abkonnenfreude. Wooden Shijps sure do put the 'itch' in Witchy & seein as how this is a limited release of 300, you better scratch fast. Go to woodenshjips@hotmail.com
Posted by Siltblog at 9:23 AM

I just got this record & it’s not leaving my turntable either. Wow. Maybe the hottest thing I’ve heard this year.

The last one, and probably the biggest myth about health care reform, is everybody thinking that ObamaCare will reduce healthcare costs. Top Organic Keto That's completely hogwash. Early on in the process, when they were trying to come up with the rules and regulations, the emphasis and one of the goals for reform was to reduce healthcare costs.

There are a number of people at present, Slim X Genie Keto who wants to lose weight or to maintain their weight. But how do you choose the right weight loss program for you? How sure you are that the diet program you are in would truly give the desired weight that you are looking for?


What many don't know is that glutamate SF180 Keto is the same as monosodium glutamate or MSG-found in a great many foodstuffs we eat every day.

Develop a Plan of Action. sf180 keto reviews For your best weight loss you've got to plan ahead. Get a journal and write everything down from what you've ate to what you are going to eat and stick to it. If you are like me, then just winging it doesn't work. If I don't write down my weight loss program ahead, I end up eating more than I realized and then usually give up. On that note...