Never A Lip Is Curved With Pain That Can't Be Kissed Into Smiles Again.....Antennas Erupt's 'Magical Energy' LP 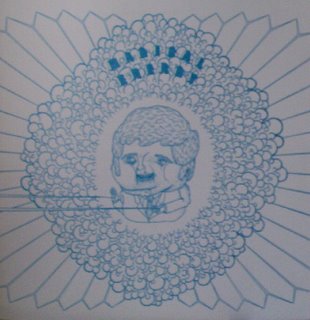 Friends, let me tell you, it has been many moons since I walkum through the valley of contemporary Free Music. At one time I was a fan, a collector, a regular goddamn patron even. We could wear out many miles of moccasin leather traipsing around the reservation while discussing my ambivalence, but somewhere between the tight assed sterility of Ken Vandermark (for instance) & the nincompoop "improv" so rampant in New Weird America I screamed "ENOUGH", cancelled my subscription & crawled under a rock. I'd had it, didn't want to know. People were tellin me all the time to read WIRE but when I'd ask them what a book about John Belushi had to do w/anything they'd look at me like I was an idiot! Hey I took a break, believe me, it coulda been worse. I could've mistaken the hubcap in my yard for an instrument & recorded a limited edition tape w/it. Leveler heads prevailed there. Your welcome.
But let's not cast stones. Yet. Recently I made the aquaintance of some interesting players that made me feel like a stupe for walkin away in a huff. Nmperign are astounding & if anyone could make a hubcap tape sound interesting-if not downright amazing-it'd be Chris Corsano. But that's hardly a suprise. The lp that caught me off guard was called 'Magical Energy' from an outfit called Antennas Erupt outta Sacramento, CA. Released on the great S-S label, I figured I was in for some off kilter, punk damaged tunery, so when the saxophone's marched outta the speakers like a Bert Wilson/Sonny Simmons cavalry charge, I was momentarily stunned. Composure was soon regained & I listened w/heart palpitating glee as these guys threw the wool around. They possess all the pluck & power associated w/the heavies on the coveted (special) initial's label's, growl w/the ferocity of the Center Of The World brigade & punch it out in the grand tradition of West Coast improvisors from Byron Allen to Smiley Winters, Glenn Spearman & beyond. The only thing missing is a Rick Ballard Imports sticker on the back of the jacket. Maybe next time. A really great lp-devoid of endowments & irony-by some guy's that just plain GET IT. Thanks to Scott Soriano for gettin me back in the mix. Who knows, I may even resubscribe.
('Magical Energy' is available via http://www.s-srecords.com/)
Posted by Siltblog at 8:56 AM

Nice blog. I will keep reading. Please take the time to visit my blog about Free Guitar Lesson