Homework Can't Kill You But Why Take A Chance?.....Buckets And Batteries 'Live To Freedom' 7" EP 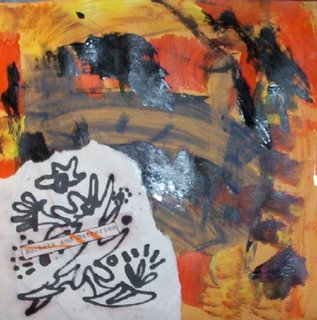 Some Thursday's is better than others & yesterday was one of'em. First off, I got a call from an ol' waiter friend of mine, Benson. He said he & his wife was comin into town & was I up for playin some Kilslug drinkin games? "I most certainly am" was my reply! They live in one of them newfangled cardboard condominium's out in West Philly-a gated community, ain't nothin there-so it was up to me to go 'n fetch the libations. Benson invented this drink, the Larry Lifeless, that is amazin! I ain't never made one, but I know it's got triple sec, Meyer's rum, a splash of maraschino cherry juice & Tab. It walks the walk, let me tell ya! The Tab is like the secret ingredient on account that it's so hard to find. But I know one place off South Street that has it so I had me some walkin to do. On my way home I stopped into this record store to have a look around. They was havin a 7" sale & the fella behind the counter is always pretty good about lettin me hear stuff so I had a gander.Jeez, I'll tell ya what, there wasn't one goddamn thing in there that caught my eye! Then at the back of the last box was this Buckets & Batteries ep. The sleeve is made out've a manila folder, handpainted 'n taped together, it looked like something that might house a Prick Decay cassette. How bad could it be? I took it up to have a listen. We couldn't have been more than a few seconds into the 1st song when the clerk said "sounds a little like Sunburned Hand". I know what your thinkin. Me too! But then I remembered he said the same thing last time I was in & wanted to hear a Delaney & Bonnie album. So I bought it. It was only 2 bucks & I can't even get the bus back for that. City of brotherly love my ass! It's a good thing I wore my Rockports.
So once home, I put it on & gave a more discernin ear. The clerk was right, it does smack-HARD- of Sunburned Hand Of The Man. At least on the first side. Then I looked at the insert & it says they're from the MA/VT area where that sorta stuff grows wild. Still, it wasn't so bad. The flip has a curious aura & flow to it that sounded like it could almost be salvaged bit's of DR503 that someone rescued from the cutting room floor. Granted, there's some whisperin & whatnot that I could do without, but at the same time, in their own way, Buckets & Batteries was lettin me know that the first Dead C lp was a Grandpappy. I was all ready to fire up a blunt in celebration when the doorbell rang. I'd plum near forgot about Benson stoppin by. I got 'Answer The Call' ready on the turntable then went over 'n let'em in. Things was about to get interesting!
So yeah, this Buckets And Batteries ep. I reckon it's a keeper. It ain't a record I'll play a lot, but I don't miss them two dollars either. Who knows, maybe it'll grow on me. It don't rain around here like it used to, but that just makes the challenge more.....challenging.
You can contact the band at; bucketsandbatteries@hotmail.com
Contact the label at: dihd, pob 901, New Brunswick, NJ 08903
Posted by Siltblog at 8:31 AM