Bougainvillea Or Bust.....Uke Of Spaces Corners County's 'So Far On The Way' LP 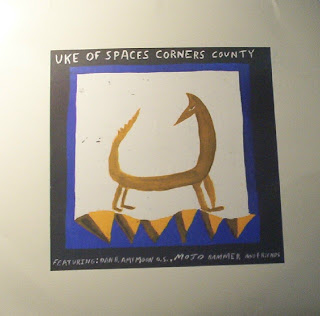 The last dream I had this mornin just afore wakin up involved red onions & the Beau Brummels. Not together (I don't think), but close enough that I cannot figure out the connection, 'cept that song 'They'll Make You Cry'. This kinda shit keeps happenin to me more & more.I knowed this Hungarian woman once who claimed to be a Gypsy soothsayer. All's I ever seen her do was sell speed, but whatever, she claimed that when your dreams start to make sense, then they's a premonition & as such, represent some sort of impending reality. I know, it sounds like the meth talkin to me too! Hey Goulash, the Ides Of March was last month! Personally I think I ought to quit eatin right before bed. That's where the problem lies. But I'd done gone & got behind w/my Blog chores, so's I needed to stay up & assess records. I was throwin back crackers smeared w/wasabi paste & gluggin bottles of that new Lindeman's green apple Lambic when I hit a patch of keepers, one of'em bein this here lp by Uke Of Spaces Corners County entitled 'So Far On The Way'. I can't say if it was ale, victuals or the tuneage, but once I got into the thick of this record my whole body began to tingle & my eyes got to sparklin. It reminded me of the scene w/Lawrence Olivier in Marathon Man when he see's them diamonds for the 1st time. I got to readin the inserts & seen one of the main brains on here was Dan Beckman who'd also been on that Flak Mask 7" I liked. But he wasn't scratchin out the numbers '11201' on this lotto ticket. In fact, this is just about as opposite of that as they come. Sure it's been recorded all over creation, but 'So Far On The Way' breathes deep from the flora 'n fauna of southern Appalachia rather than the wheeze've urban twiddley-dum. It's corn pone jocularity conjurs up an aura of Doc Snocks hickum & Dan's voice is similar enough w/Pete Stampfel's to lend an air of friendly Holy Modal Rounders cheer onto the porch. They's even got the gumption to croak out a haunting dirge-like interpretation of Sun Ra's 'Outer Spaceways Incorporated' (here entitled 'Outter Spaceways'). And guess what? It don't suck! Addin this lp in w/the recent spate of great releases what's come out over the past few months, it nestles comfortably between Lord Fyre's 'Destruction At 2013' & The Cherry Blossoms debut (which is gonna get harped on here soon). I'd say this is a dinger for comers, be they shoeless or clueless. And how 'bout that paste on cover & hand stitched lyric book what's enclosed?. I dunno about you, but until Pep Lester releases his lp of Avant-Bluegrass ditties, the bar for goodness starts here. Fostered by 8 different labels, try gettin this via; http://www.helloasshole.com/ or http://www.fusetron.com/
Posted by Siltblog at 7:43 AM