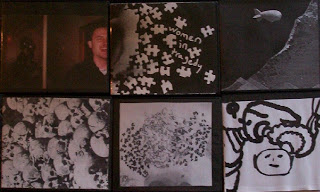 Ah Toronto......magnet for the displaced Maritimer, home to the CN Tower, Lake Ontario, Bluejays baseball & YONGE STREET! Not to mention more lawyerin jobs & doctorin jobs that you could spew a stream of Molson vomit at. And bands, lot's 'n lot's of bands!. Or so says Kevin Hainey a fella what reads the Blog & took it upon himself to send me a packet of the city's (in his words) "fertile underground treasures". Okay, so maybe there ain't so many bands up there (& that plethora've lawyer & doctor jobs is sketchy too by all accounts) but somethin's goin on & that's a good thing, right? Well..... My memory of the 'Toronto Scene' is outfits like The Poles, Viletones, Diodes...basically shit that's ancient. And stoically Punk Rock. This new generation-while(perhaps) 'Punk' in spirit is decidedly noise (be it art, ambient or harsh) in delivery & product. Gastric Female Reflex I'd heard before, but the rest is new to me. Name-wise anyways. I mean, I feel like a worn out traveler down this noise path & while this one's origins hail from Ontario, it ain't a whole lot different from the ones I been up 'n down outta Michigan, New York, Western Mass, etc. That said, one of these cdr's features "William from Nurse With Wound" but that means about as much to me as sayin it's 'William from Mormon Tabernacle Choir". There's elements from all sort's of influences; concret, post rock, goth, sine wave, collage-scape, I dunno, it ain't terrible, but it ain't necessarily nothin to lose no sleep over neither (just like The Poles, Viletones or Diodes releases of yore). One called All Under Heaven had a nice, languorous post-blues loft to it that would fit well on the shelf next to them Children Of Microtones releases, but the rest.....I just hope they have a drawin board up there to Toronto big enough to fit everyone's next plan of attack. For's all I know, there might even be a number of bands & whatnot operatin under the same stratagem here in Philadelphia. If there is I implore you; PLEASE DON'T SEND ME NOTHIN! I mean it too. Thanks.
Now if this line of thinkin don't agree w/y'all, well, that's how the cookie crumble's sometimes. Kevin, thanks for thinkin of me & sendin down this batch of goin's on. It ain't my bag but I now know's a little more than I did this time yesterday. For any what's curious about these shenanigans from up The Big Smoke email; kevin.hainey@sympatico.ca for further info.
Posted by Siltblog at 7:53 AM