The Fine Art Of Telling The Truth.....Blues Control's 'Puff' LP 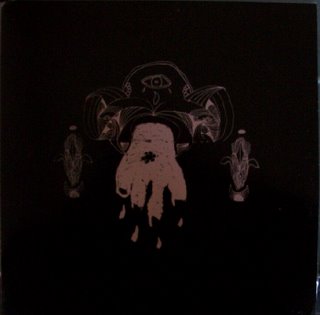 Way back in a magical period I like to refer to as my college days, I had this class what was about Herman Melville. He was quite a character as I remember, traveled all over the world, exotic locales, a successful writer, never any record of nefarious womanizing or of bein a drunkard. In the brash of my youth, he seemed someone to emulate. But then I come to find that he weren't such a big deal after all. Moby Dick, the book widely considered to be the greatest American novel of all time, didn't do shit in Melville's time & by the end he was more like the disenfranchised character in 'Bartleby The Scrivener', pushin a pen in some anonymous customhouse. That didn't sound so romantic. "Fuck it" I said, "who needs them sort of heroes"? I may never write somethin like Moby Dick, but by the same token, I sure ain't gonna be responsible for nothin like 'Clarel' either!
So here I am,deep in the middle's of my years, when I get's this book about the Transcendentalists & it turns out to be a merry ol' read. The one part that was saucy was where the writer was goin on about how Melville was ruined by an unrequited & all consumin affection for Nathaniel Hawthorne. So that was the problem. He had a touch of the 'Lavender Flu'! But then there ain't no more about it. The author makes this dramatic posit & then goes onto somethin else. Maybe they was just close friend's is all. They say Lincoln slept w/men all the time, but that was to keep warm. Them was funny times back then. Hell, they used to drink port wine WITH dinner! Can you imagine? Honestly, I think I'd almost rather cuddle up to Honest Abe.
Now what does any of this have to do w/record writin your wonderin? The answer is...not much! Except that part about Melville bein transfixed by Hawthorne & it bein his ruination 'n all. That's kind've how I see myself & Blues Control. I can't stop listenin to'em or thinkin about'em! Not since this lp on Woodsist nestled itself onto my turntable. I can't get nothin done till I wrap my noggin 'round this. I feel a stirrin in my loins as well, but that's probably from the frog legs in the paella I ate last night (good too). Them cassettes was great ethereal works that transcended the medium, but hearin the beauteous deconstruction of 'Puff', you'd almost think that the vinyl format had been created solely for this lp. That's what's got me so....vexed. I am like Pan to Blues Control's Apollo. Whatever outrageous prose I might spill out onto this Blog ,the loyal shall come forth to read & to weep, either out of laughter or sorrow for that is it's humble goal. But the music of Blues Control, as evidenced on this record, is a master work explodin. It germinates absolutely from the bowels of the Blues but erupts via a postmodern portal; there are gorgeous sheens of rust that fissure throughout, harmonica's smoke in the distance, guitars splatter, keyboards ooze white hot neo psychedelic lava, in the end, like the music emitted from Apollo's lyre, it is a devastatingly wondrous experience. And as much as I hear the (non specific) PSF or Akiyama buzz, to me Blues Control seem beget from the prominent clang & snarl of Dead C, who was beget by This Heat, who was beget by Faust, from whose seed it all originated. And that's nothin to sneeze about, unless you's is allergic to greatness. A cd on Holy Mountain is next. They's on tour right now too, so drop everything & go see'em! I know it's early, but 'Puff' seems a shoe-in for one of the year's best.

The Adolescent Sessions continues this Thursday, 10/4 with Celebration & Blues Control.

The Adolescent Sessions is a bi-monthly event featuring 2 bands, 2 rooms, CCTV, projectors, and a lot of wiring. Presented by Billy J and Viva Radio, the new series combines live broadcast recording sessions with a voyeuristic A/V experience. Part show, part real-time documentary, part Schrodinger's Cat, The Adolescent Sessions is a sensory anomaly in which the audience witnesses the bands' performance in progress via surveillance video feed streaming from an adjacent room. Audio and video recordings are later aired on Viva Radio (www.viva-radio.com).