Sometimes Ya Gotta Cough To Get Off.....Burnt Hills 'To Your Head' lp 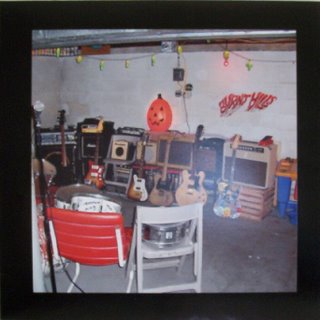 ConDemek fans might disagree, but the germ for the contemporary Albany fringe scene would've been the lil group that did, Erl. Their debut 7" (& subsequent lp) was a soupy, Smashchords based cauldron of simmering, derailed twang that functioned as a seismic rumble throughout the "Cradle of the Union", a call for all likeminded-whether they be cityfied or country fried--to come forth & be counted. The results were estimable & the Erl label was founded. Then sometime in the mid 90's, there was a schism, Erl dissolved & out of the bubbling crude came a new & more resilient taskmangler, Flipped Out. The label has torched a few different numbers through the past decade; Ziamaluch, Connie Archer & Paraquat Earth Band, but the latest, Burnt Hills, might be stickiest of the icky yet to function in the Eastern NY junction.
Comprised of 6 guitars (known here as blutar, gertar, bootar...you get the idea) & 3 drummers (skins, skips 'n skids), Burnt Hills is a raw, rambunctious floom ride through a gauntlet of sharred metal & splintered wood white caps. Comprised of four (non banded) tracks, the run is akin to shooting the unchartered rapids of Vermonster's 'Instinctively Inhuman' lp in a bong-canoe insulated w/Global Unity Orchestra records to absorb the shock. In the dark! It's a sprawling 'n seemingly rudderless trip which at times feels like it's gonna crash into bits. But somehow they manage to navigate themselves back into an ebb 'n flow & as the final track fades out in a blaze, you know that while these herb grinders're gone, they ain't to be forgotten, even though they left only 99 numbered copies of this debut lp as their legacy. Those of you who're curious about this bootiful cacaphony should contact http://www.fusetronsound.com/ or http://www.flippedoutrecords.com/
for they are sure to go quicker than a bag of bammy at a bee-in.
Posted by Siltblog at 2:24 PM

These articles are fantastic; the information you show us is interesting for everybody and is really good written. It’s just great!! Do you want to know something more? Read it...: Head Shop, Herbal Grinders ,
Bongs, Glass Pipe. Visit us for more info at: http://www.headshopinternational.com/