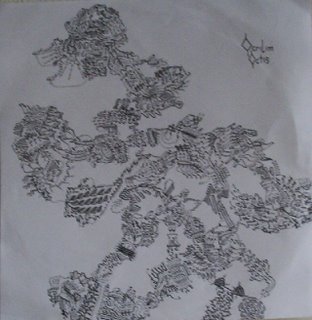 Twenty years ago, the only way you were likely to come across a record like this was via RRR. And chances are that only the most ardent collectors of difficult music would've payed any attention. They would come into the store, a 'want list' locked in a huge spiral notebook containing hundreds of pages of cross referenced records would be opened to a specific spot & said purchase would be duly noted as GOT by the black horizontal line of a magic marker. Then they'd ask to see the Current 93 record hanging on the wall. They'd study it intently & start to quietly chatter, you know, like a cat does when it see's a bird. And suddenly they would recover, hand the record back to you & off they'd go. Bye!
Ten years ago you might've found a record such as this on Stomach Ache. It would've had a charming moniker such as 'The Tipplers' or maybe even something like 'Ligeti Demos' & chances are only the most ardent collectors of marginal noise or the truly hornswoggled would give a shit. They'd come into the store w/a copy of Muckraker, purchase said record & circle it in the studious discography Mr. Marley had compiled. Then they'd ask to see the Amon Duul record on the wall. They'd stare at it like it was some magic orb, then want to know why it was so expensive, ask if you took checks & when you said "no", split. Later!
Last week I found this record sitting in a singles bin of new releases & saw it was on Troubleman. I've got a few records on that label in my collection so I figured what the hell? I had a gift certificate & was hard pressed to find anything I wanted. I looked at it for a minute, saw it was limited to 500 & bought two! On the way out I asked the clerk if he had any Wildman Steve records & when he said "who"?, I was outta there. See ya!
So I get this back, open it up & it's got about a million tracks on it, all of which sound like false starts to some bogue metal song. I wouldn't say it's difficult because...what's the point? It's not harsh, it's not even bad, it's just....pointless. Unless the point is to make people nostalgic for that Flipper track 'Brainwash'. If that's what's behind this, than Mr. Ocrilim (or whoever) is a genius! If not, then he's just half assed his way into the record books w/a sad, contemporary counterpart. Another dud, oh well. Revisionist history is the new postmodernism & in the words of Det. Tony Baretta, "you can take that to the bank."
www.troublemanunlimited.com
Posted by Siltblog at 8:17 AM

your like too smart. How about you stop thinking about how much IQ you have and go and like some ass crack cos thats what your true desire is. I know about people like you and your time will come sooner or later but until then I will watch you suffer during your period and whinge about your growing pains in your head while you watch me fuck your mum in the ass. She loves it