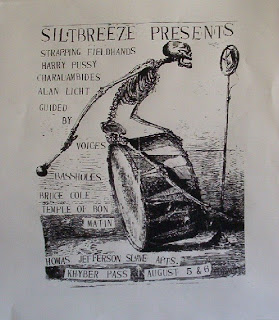 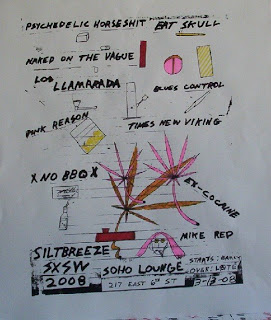 The 2008 SXSW Festival will mark the 1st participation of a Siltbreeze showcase there EVER. To commemorate this event we have run off a limited number of silkscreened posters made for posterity's sake, after all it's sure to be the concert of the century, if not next week.
The artwork comes courtesy of an unknown stoner. I found the background (pencil) drawing of the drugs/paraphernalia tucked inside a used copy of Black Sabbath's 'Sabotage' lp many yrs ago. We added the band names, time, locale & presto, instant collectors item. Posters measure apprx. 14"x16", were handscreened by Mr. John Sharkey of Clockcleaner fame & a few were hand colored by various members of Times New Viking while they took turns sitting around a table making the contents of a bottle of Old Granddad disappear. First come 1st serve, posters are 13$ ppd US, 16$ elsewhere. They will be shipped in sturdy cardboard poster tubes so no creasing.
And in addition, we asked Mr. Sharkey to run off some ltd. copies of a much sought after poster for a Siltbreeze event that went down in the summer of 1994. Folks inquire about it all the time, now's your chance to snag a copy. Measurements are the same, cost too is 13$ ppd US, 16$ elsewhere.
As a special feature we will make available BOTH copies for 25$ ppd WORLDWIDE. Additional copies are 10$ per poster ` worldwide as well. Interested parties can paypal at; sltrx@pil.net to get'em. We'll have a handful at the showcase & when they're gone, they're gone & won't be reprinted. So act now!